What is JSON Web Token (JWT)?

If you Google it, probably the results will be too scientific and abstract to understand. So, let’s explain simply what JWT is:

JWT is an open standard (1. RFC 7519) based on JSON format. It is used to transfer authentication’s data in client-server applications created by the server, sent to the client. Subsequently, the client uses the JWT token to verify identity.

To put it simply – JWT is a string in the following format: header.payload.signature

The first 2 have a JSON-like structure. The third element is calculated based on the first and depends on encryption. If encryption is “none” - the signature is missing.

Let’s move from the theoretical part to the examples:

Consider the first part of the JWT - Header:

It contains only information describing the token itself. The header describes cryptographic operations applied to a web token.

alg: algorithm used for signing / encryption   // this key is required

Payload is the following:

The second part of the JWT token indicates user information. For example 'qwerty@gmail.com'. Service keys may also be used, which are optional.

aud: array of cases-sensitive strings or URI. If the receiving token side (server) is on in this list, it will ignore the token

In this article (2) you can find a complete list of information.

The 3rd part, as noted earlier, may be absent if the token is not signed:

The serialization process consists of coding all 3 parts of the JWT token (or only Header and Payload, if signature is missing).

Coded by an algorithm base64url(3)

In the code it can be represented as follows:

To decode a token, simply split it into points and convert the header and payload from the base64url code back to the string. An example of the code that does it:

There are many libraries that work with JWT web tokens. For example, consider one of them - jsonwebtoken(4) : 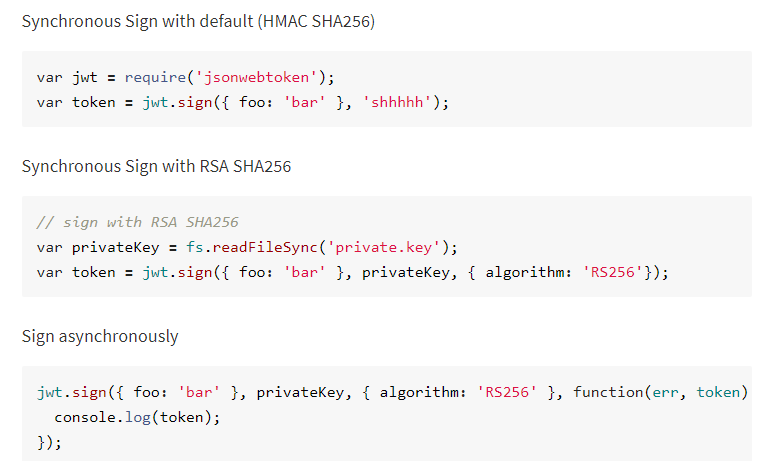