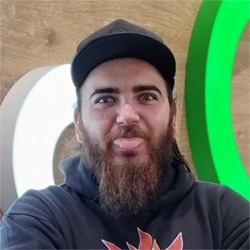 The guys who interviewed me were great, even though they didn't know me. They were very open, friendly, and cheerful.

Aleksandar's father first sparked his interest in computers, which led Aleksandar to choose the career of a system administrator. He furthered his affinity for IT in high school. He specialized in Computer Networks at the Technological School of Electronic Systems and later continued his education at the Technical University in Sofia,. He kept growing throughout the internship he completed in his senior year, and his curiosity drove him to countless training sessions and seminars. Aleksandar joined Melon in August 2019 as a System Administrator.

He discovered Melon from an online job posting. His friends told him that they had heard positive feedback about the company

“The guys who interviewed me were great, even though they didn't know me. They were very open, friendly, and cheerful,” Aleksandar says.

“I was 22 at that time and I was surprised that the System Administrators had a fridge full of goodies in their room. I can’t lie, this attracted me even more,” he laughs.

In May, 2022, Melon became part of Kin+Carta, a dynamic global consultancy, leveraging over 2,000 highly specialized technologists, strategists and creatives across 4 continents.

This strategic partnership is the biggest change he has witnessed in the company so far and Aleksandar is excited but a bit nervous about what new technologies he will be introduced to that he will have to learn from scratch. Yet, he is curious and expectant about working on Kin + Carta's clients and projects and is eager for the companies to begin sharing their best practices. “Being a System Administrator for 200 and 2000 people is different and challenging for me. I'm excited about finding out what systems, tools, and procedures Kin + Carta employs,” he says.

Due to the close collaboration between his team and the DevOps team, both have experienced significant growth since around 10 people have joined for the past three years.

“I have also changed a lot. I was a teenager when I joined Melon, living day to day while expecting the party on Friday. I've matured, I'm more responsible, I plan for the future, and I give myself enough time to come up with rational solutions to the problems I stumble upon,” Aleksandar shares.

The chance to do what he enjoys most and explore his passion for technology is what he loves about his job. He enjoys interacting with so many people who share his interests.

He is currently working on the most challenging project he has ever undertaken. It is about a backup system for all Windows machines and devices on Melon’s network. This includes all the servers and virtual machines, in addition to the computers that are dispersed among the office's desks and everyone's laptops. The project is challenging because he had to master a new system and a separate server that were purchased together. “I read a lot and I asked many questions. Then, I presented the project and after a year and a half it is almost towards its end,” he says.

Since 2019, Aleksandar has discovered that asking his teammates for support and advice is the best practice because they are all there to assist each other. "I learned that you should constantly ask questions about people's requests and ask them exactly what they want to do, never assume, and see if this is indeed the solution to their problem or you may offer them something better," he says

Aleksandar is proud of everything that he has achieved and learned along the way – regarding System Administration as well as DevOps. He believes he has been successful in inspiring confidence in his team to take on such a significant project and to gain knowledge from it.

His advice to the new software developers joining the company is to not worry when meeting new people and to be transparent with their colleagues since Melon’s team will always be open and friendly. Aleksandar also advises them to not be afraid of trying new things and pushing themselves because they will always have someone to turn to for help if they need it.

Aleksandar values his friends and enjoys spending time with them, whether it be in a park or a nice bar in Sofia. On the weekends, he enjoys going for long walks in the Vitosha mountain. He enjoys learning about the most recent technological advancements as well as reading books and watching movies. Aleksandar was introduced to Airsoft by a coworker, and they frequently go play together. His colleagues are friends of his and he often spends time with them after work.