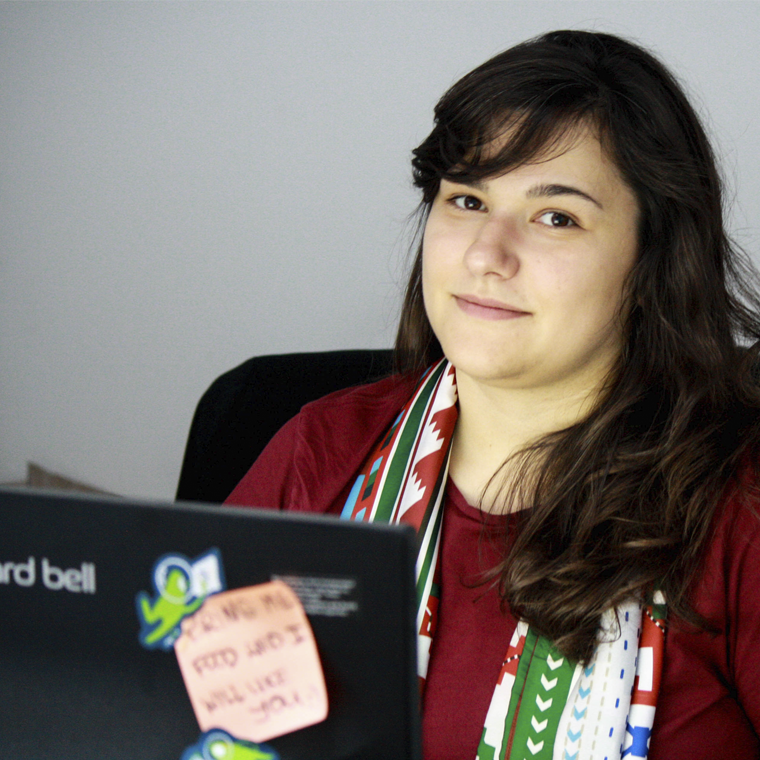 The question ‘A designer or project manager?’ at her interview is the reason Alexandra Bakalova became Melon’s user experience designer in 2016. A friend of hers recommended the UX/UI and Visual Design team at Melon. However, at that time there were no open positions for designers. That is why Alex applied for a project manager. She charmed the interviewers and they gave her the freedom to choose between the two positions. Now, Alex is doing a little bit of both.

She describes herself as a ‘nerd.' To back up her statement, she talks about her four diplomas. After graduating the French Language School in Sofia, Alex fled to France. After six years, she left the city of love with two bachelor degrees in Graphic Design and Applied Arts, and two master degrees in Media, Technology, and Design and Project Management and User Experience Design.

Alex talks about her job with affection. She has vast experience with web platforms, mobile apps and creating logos. She has mainly worked with tech companies approaching her with semi-ready wireframes for internal use platforms. Alex loves such projects because she works directly with the end user. ‘Constantly, I receive feedback about the functionalities and thus I understand the IT sector better,’ she says.

Also, Alex dearly enjoys working with startups. She likes taking part in the brainstorming about new products and services. ‘You know that you are helping those people,’ says Alex. Her input helps the clients make their business more valuable with a cost-friendly budget.

Teamwork and understanding the development process are the benefits Alex appreciates at Melon. ‘Here, for the first time, I work in a real team environment,’ she says. Also for the first time, she had to work with front-end and back-end developers, as well as QAs. Alex notes that a vital UX practice is to show your wireframes to the developers before sending them to the client to make sure that what you suggest is possible. Also, she learned something about herself. ‘I thought I would act like an introvert. However, Melon’s friendly environment helped me overcome this,’ she says.

Almost every day, Alex comes to the office with positive anticipation and she talks about her colleagues with a smile on her face. She says that everyone is willing to help, and that’s what she values the most. Alex believes that the people at Melon are emotionally intelligent and have compelling interests outside work which always surprise her. If she has to sum it up: “Melon is a friendly and positive place”.

Of course, some things can be improved. Alex thinks that people from different teams who are working on the same project need to work in the same room. Thus the chances of miscommunication will decline.

Travelling around Europe and the States is one thing Alex knows best. And she loves attending concerts, drawing, calligraphy, playing with her neighbors’ dogs and bar hopping.