Melon taught me to be patient and self-controlled. The people and the company showed me how to better manage my time and helped me acquire soft skills

Denis Dimitrov joined Melon as a front-end developer in 2019 at our Veliko Tarnovo office. Denis had a childhood dream of becoming a game designer since he loved playing video games. To pursue his dream, he went to The University of Veliko Tarnovo to study Information Systems and discovered that he enjoyed developing websites and mobile applications. So, he decided to go after a career as a software developer.

Denis learned about Melon from a job ad. While still at university, he began working at another software development company, but the environment there did not meet his expectations.

"Friends told me that Melon was one of Veliko Tarnovo's top software development companies. They also said it was very people-oriented, so I decided to apply," Denis remembers.

He knew Melon was the ideal place for him after the interview. "I felt like I was meeting up with friends. We chatted about my hobbies and interests, and I knew right away that I wanted to be a part of the company," he says. Denis had been receiving job offers from other firms with higher salaries, but he decided that Melon is the right place for him.

He thinks that not much has changed in the three years he has been with the company. "The friendly atmosphere remains the same. It is only getting better," he says. Denis is close with many of his colleagues, and he frequently hangs out with them after work. During the pandemic, he managed to keep his friendships.

"Of course, the lockdown had an impact on everyone, but we are catching up now," Denis explains. "We get together, have a drink or two, and have a good time." He appreciates that management paid attention to him during the pandemic and frequently asked if he needed anything. Denis believes that many people got used to working from home, but also that more and more are realizing how enjoyable it is to be in the office together.

Denis thinks the most important skills he has learned throughout his three years with Melon are to be more outgoing, to open up, and communicate more effectively. He also learned how to solve a variety of software and not only problems and that there is always something positive to take away from a difficult situation.

His first project was the most interesting one he ever had worked on. It was a database for a UK company. It featured a large search engine with information on each user. "The project was very enjoyable and interesting, and yet challenging because I worked alone and did not have the self-esteem. I was questioning every decision I made. I put a lot of effort into it and wanted to do it the best way possible,” Denis says.

His most recent project was the most difficult he had ever worked on. The final product was an innovative online meeting platform with advanced features. Instead of sharing their screen, attendees could, for example, upload a YouTube link that everyone at the conference could watch. During a conference, people could also separate each other in secret private rooms. Companies like Facebook, Google, Microsoft, and GitHub hosted meetings on that platform, and it was a learning experience for Denis and his team. They worked on this project for a year and a half, and it was challenging since they had to design technologies that were not yet available on the market.

“Melon taught me to be patient and self-controlled. The people and the company showed me how to better manage my time and helped me acquire soft skills that I did not have before," Denis adds.

His advice to the new software developers joining Melon is to not be shy and not be embarrassed to ask a lot of questions. Also, to socialize with people at the office because the atmosphere is friendly, and it can be lots of fun.

“People at Melon are willing to help with anything, this is Melon’s culture. That is the first impression I got of the company right away on my interview. Everyone supports each other. In three years, I have not seen a single person who is any different than that,” Denis says.

In his free time, Denis loves playing video and board games with friends. When he needs a break, he likes to ride in his car without a set destination. 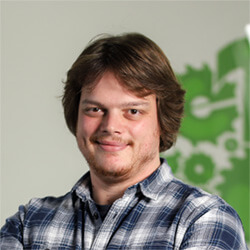 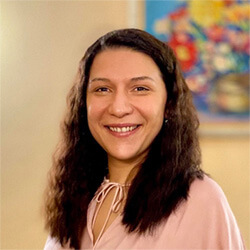