Sofia International Film Festival (SFF) is an annual film festival which takes place every March in Sofia, Bulgaria. For a month, the festival screens internationally-renowned feature films and documentaries in various theaters. For its 21st edition, Melon developed pro bono iOS and Android applications which complement the website. 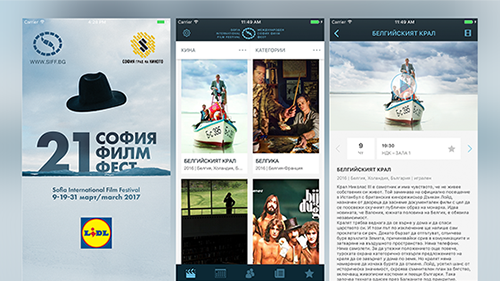 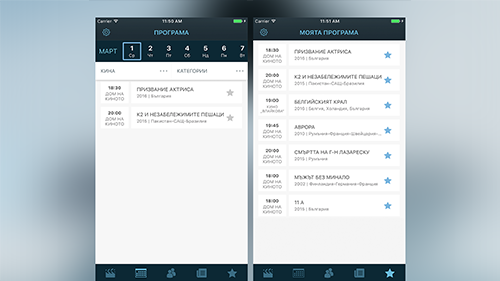 Sofia International Film Festival has been running since 1997. The festival’s goal is to introduce the Bulgarian audience to the latest world-class cinema phenomena. The festival has grown over the years and besides the films, it has brought many distinguished directors, producers, screenwriters and journalists to Bulgaria. SFF has become one of the important film festivals in Europe.

For Melon, it is only natural to admire the creative film industry. This appreciation led to our offer to develop pro bono an iOS and Android applications for the festival.

Even though the client had a lot on their plate organizing the event, the communication and the feedback were smooth and timely. The same goes for the third party that optimized the server following our recommendations.

Some of the functionalities replicate the SFF’s website. The apps allow users to browse the festival’s program, create their own, follow events and receive notifications with news and updates. We added filters by theaters, dates and movies.

The goal was to release the iOS application for the opening of the festival. We uploaded it to the app store a couple of days ahead and got the approval on the opening night.

Melon’s UX and UI team created the design, adhering to the paradigms of the iOS and Android user experience. The biggest difference is in the navigation bars. Our designers came up with custom non-native iOS and Android animations to pop-up when information is being downloaded.

The server optimization by a third party and the app development were simultaneous. To speed-up the process, we created a mock server. This saved us a lot of time because we could build the applications without waiting for the mobile upgrade of the actual server.

A time-saving technique was to create Unit tests for all the server functionality. So, when we got the updated server, we could immediately catch some small bugs and send change requests to the third party. They were quick to act upon our feedback.

Another challenge for the iOS team was the streaming of YouTube trailers which is not native for the platform. It is a little bit easier with Android. We had to consider where the trailer would pop up, whether the whole screen will appear or parts of it, etc. However, at the end, we made it work fine.

The initial server wasn’t mobile friendly and the information was delivered as a whole page when we needed just a fraction of it. We had to filter the unwanted information and format it, so that the website and the application could have the same look and feel. We opted for a custom filtration which is unusual for iOS and hard to find how to implement.

This pro bono project was the perfect opportunity to try new technologies. At the beginning, we were concerned how to make it time- and cost-effective. We succeeded by using the third edition of the relatively new language Swift and its add-ons – Package Manager, Carthage and Fabric. The immediate results for the client are: